The Nazca Lines in southern Peru are some of the best known geoglyphs on earth, but they aren’t the only ones in the Nazca desert. About 200 kilometers north west of Nazca is another isolated and somewhat less popular geoglyph called Paracas Candelabra. It is also known as the “Candelabra of the Andes” because of its resemblance to a three-branched candlestick.

The geoglyph is etched on the sloping face of a hill at Pisco Bay on the Peruvian coast. The design has been cut into the soil to a depth of two feet with stones, possibly from a later date, placed around it. The figure is 181 meters tall, large enough to be seen as far as twenty kilometers out at sea.

The Paracas Candelabra is generally attributed to the Paracas Culture of the first millennium BCE, based on pottery discovered in the area that was radiocarbon dated to 200 BC. The pottery likely belonged to the Paracas people, although it has never been confirmed whether they were involved in the creation of the geoglyph.

The overall shape of the geoglyps is that of a trident—possibly representing the lightning rod of the god Viracocha, a mythological figure in South America— the branches split out further into more smaller branches. Some say it looks more like a cactus.

Frank Joseph, an author obsessed with alternative theories, have found likeness of a hallucinogenic plant called jimson (Datura stramomium) in Paracas Candelabra. His theory is that prehistoric inhabitants of the Paracas region travelled north to California to collect the plant, and the geoglyph was used to help navigate home. The idea that the geoglyph was used as a navigational aid is an old one though. Locals believe it was used by sailors to identify the peninsula. 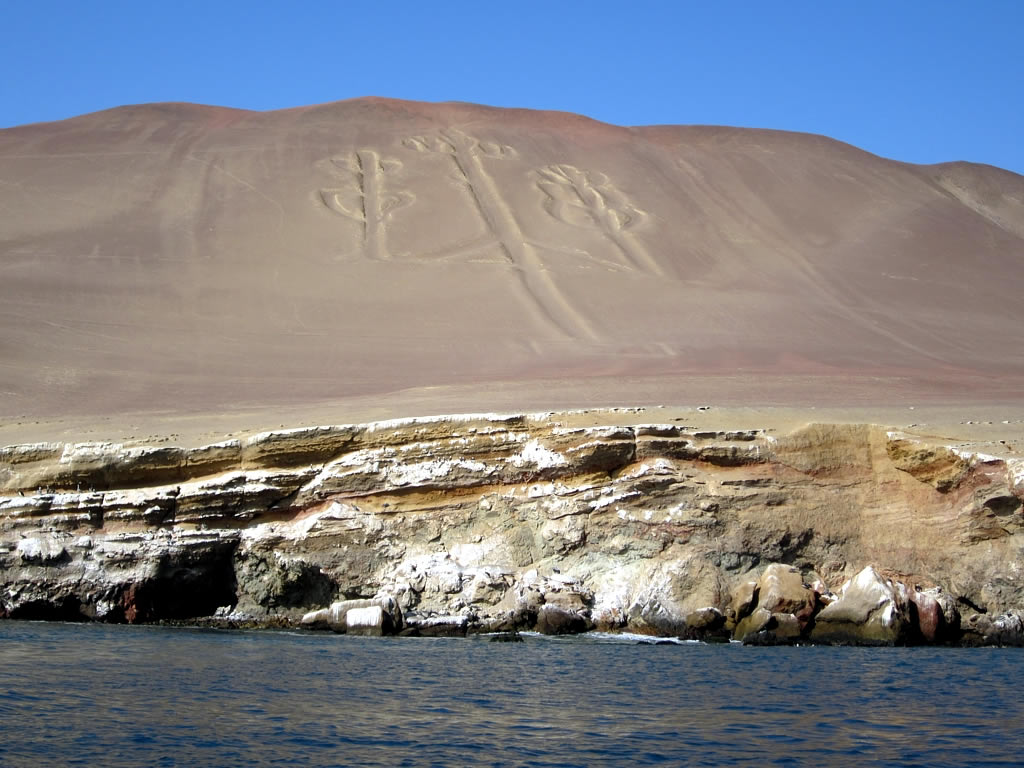 Although the exact age of the Candelabra geoglyph is unknown, archaeologists have found pottery around the site dating back to around 200 B.C. This pottery likely belonged to the Paracas people, although whether they were involved in the creation of the geoglyph is not known. The reason for the Candelabra's creation is also unknown, although it is most likely a representation of the trident, a lightning rod of the god Viracocha, who was seen in mythology throughout South America.

Whatever the true nature of the ancient monument is, it continues to capture the imaginations of researchers and visitors to this day.

Maybe its true value is not in the truth of its existence but in the questing it inspires.

Love this Owl, thanks for sharing :o) things that make you search on a deeper level ....


Would be interesting to collect all similar around the earth and piece them together
"Promise me you'll always remember: You're braver than you believe, and stronger than you seem, and smarter than you think." - A. A. Milne
Top
Post Reply
4 posts • Page 1 of 1