If you’ve never heard of an egg-laying mountain, you probably don’t know about Chan Da Ya, a mysterious cliff in China that reportedly lays perfectly round or oval stone eggs every 30 years.

Located in Qiannan Buyi and Miao Autonomous Region, China’s Guizhou Province, Chan Da Ya – Mandarin for “egg laying cliff” – has been puzzling geologists for decades. The 9ft high and 65ft long heavily eroded formation has an uneven surface dotted with dozens of round and oval-shaped stones of various sizes. As the elements continue to eat away at the cliff, the harder “eggs” become even more exposed and eventually fall out of their natural sockets. According to the people of the nearby Gulu village, Chan Da Ya takes 30 years to lay its strange stone eggs

The egg-laying phenomenon of Chan Da Ya is considered unique, so geologists hoping to come up with an explanation have had to travel to the remote mountainous region to study it first-hand. Their tests showed that while most of Mount Gandeng is made of harder sediments, this particular section is mostly made of calcareous rock, which is easily eroded. The eggs are made of much tougher rock, so the difference in time needed for the elements to go through the different types of rock explains the egg laying phenomenon. However, no one has yet been able to explain how a calcareous section that was formed during the Cambrian period can still be around 500 million years later, or why the stone eggs are all round or oval 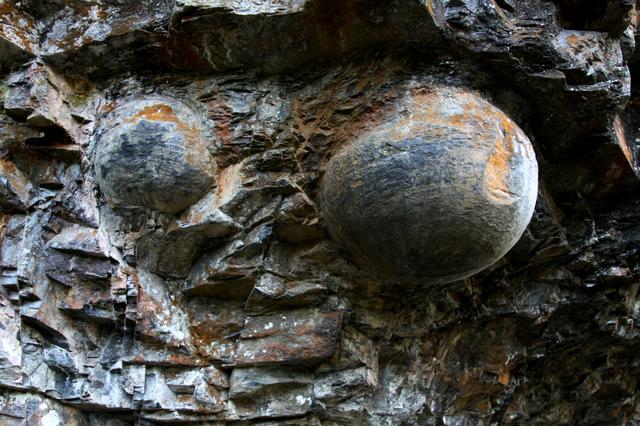 Chinese media reports that while Chan Da Ya is the largest egg-laying cliff on Mount Gandeng and features the highest concentration of stone eggs, it is certainly not the only one. Photos taken in the same area show eggs coming out of others sections of the mountains as well, some straight sideways, and others hanging down like hornet nests.

Geologists believe they may have finally solved the mystery behind an odd cliff wall that appears to lay egg-shaped stones every 30 years.
Chan Dan Ya – Mandarin for ‘egg-producing cliff’ – is 19ft high and 65ft long.

It has an uneven surface but every three decades it emits these odd-shaped rocks.
Residents in the nearby village Gulu have been scratching their heads over many years as they keep finding perfectly smooth rocks.