Astronomy from the Stratosphere

Astronomers from NASA’s Stratospheric Observatory for Infrared Astronomy, SOFIA, Northwestern University, and the University of Maryland were on hand at the 231st meeting of the American Astronomical Society in Washington, D.C., to discuss new scientific results describing how their studies of dust grain polarization and celestial magnetic fields are leading to a better understanding of star formation, theories about how gas cools in the interstellar medium, and how magnetic fields are creating stellar winds around black holes.

The science results were obtained using SOFIA, a highly modified Boeing 747SP jetliner fitted with a 100-inch (2.5-meter) infrared telescope. SOFIA is an international partnership between NASA and the German Aerospace Center (DLR).

The flying observatory has a suite of seven different instruments – cameras and spectrometers – that are flown into the stratosphere to altitudes as high as 45,000 feet (13.7 km) on missions up to 10 hours in duration. This altitude puts the observatory above more than 99 percent of the Earth’s water vapor that blocks infrared wavelengths from reaching the ground. SOFIA’s ability to study mid- and far-infrared wavelengths (28-320 microns) provides data that cannot be obtained by any other current astronomical facility on the ground or in space, including those now under development. 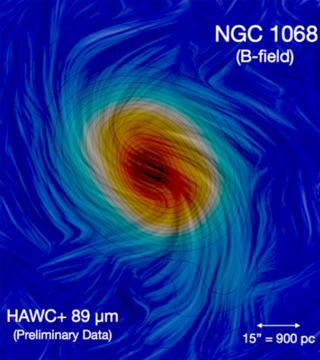 The HAWC+ image of NGC 1068 shows, for the first time, the magnetized spiral arms of the host galaxy. The forces exerted by the magnetic fields are dominated by rotation of the disk, making the dust grains to be aligned along the spiral arms as they are clearly detected by these HAWC+ polarimetric observations at 53 microns.

The High Resolution Mid-InfrarEd Spectrometer (HIRMES), is a spectrometer optimized to detect neutral atomic oxygen, water, as well as normal and deuterated (or "heavy") hydrogen molecules at infrared wavelengths between 25 and 122 microns (a micron is one-millionth of a meter). These wavelengths are key to determining how water vapor, ice, and oxygen combine at different times during planet formation, and will enable new observations of how these elements combine with dust to form the mass that may one day become a planet.