Young galaxies blaze with bright new stars forming at a rapid rate, but star formation eventually shuts down as a galaxy evolves. A new study, published January 1, 2018, in Nature, shows that the mass of the black hole in the center of the galaxy determines how soon this "quenching" of star formation occurs.

Every massive galaxy has a central supermassive black hole, more than a million times more massive than the sun, revealing its presence through its gravitational effects on the galaxy's stars and sometimes powering the energetic radiation from an active galactic nucleus (AGN). The energy pouring into a galaxy from an active galactic nucleus is thought to turn off star formation by heating and dispelling the gas that would otherwise condense into stars as it cooled. 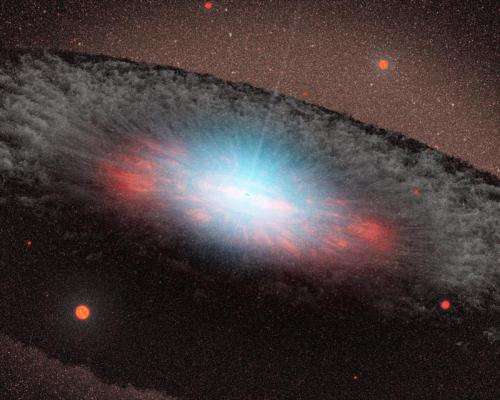 This artist's concept depicts a supermassive black hole at the center of a galaxy. The blue color here represents radiation pouring out from material very close to the black hole. The grayish structure surrounding the black hole, called a torus, is made up of gas and dust.

It’s a mystery that’s puzzled astronomers for years. Which came first, supermassive black holes or the galaxies that surround them?

In 1974, astronomers discovered a radio source at the center of the Milky Way emitting radiation. It was titled Sagittarius A*, with an asterisk that stands for “exciting”, well, in the “excited atoms” perspective.

This would match the emissions of a supermassive black hole that wasn’t actively feeding on material. Our own galaxy could have been a quasar in the past, or in the future, but right now, the black hole was mostly silent, apart from this subtle radiation.

Astronomers needed to be certain, so they performed a detailed survey of the very center of the Milky Way in the infrared spectrum, which allowed them to see through the gas and dust that obscures the core in visible light.

They discovered a group of stars orbiting Sagittarius A-star, like comets orbiting the Sun. Only a black hole with millions of times the mass of the Sun could provide the kind of gravitational anchor to whip these stars around in such bizarre orbits.

Further surveys found a supermassive black hole at the heart of the Andromeda Galaxy, in fact, it appears as if these monsters are at the center of almost every galaxy in the Universe.

There's a Black hole in Sagittarius if I remember at 25 degrees.
deleted
Top
Post Reply
4 posts • Page 1 of 1