Astronomers using NASA’s Hubble Space Telescope have discovered an immense cloud of hydrogen dubbed “The Behemoth” bleeding from a planet orbiting a nearby star. The enormous, comet-like feature is about 50 times the size of the parent star. The hydrogen is evaporating from a warm, Neptune-sized planet, due to extreme radiation from the star.

This phenomenon has never been seen around an exoplanet so small. It may offer clues to how other planets with hydrogen-enveloped atmospheres could have their outer layers evaporated by their parent star, leaving behind solid, rocky cores. Hot, rocky planets such as these that roughly the size of Earth are known as Hot-Super Earths.

“This cloud is very spectacular, though the evaporation rate does not threaten the planet right now,” explains the study’s leader, David Ehrenreich of the Observatory of the University of Geneva in Switzerland. “But we know that in the past, the star, which is a faint red dwarf, was more active. This means that the planet evaporated faster during its first billion years of existence because of the strong radiation from the young star. Overall, we estimate that it may have lost up to 10 percent of its atmosphere over the past several billion years.”

The planet, named GJ 436b, is considered to be a “Warm Neptune,” because of its size and because it is much closer to its star than Neptune is to our sun. Although it is in no danger of having its atmosphere completely evaporated and stripped down to a rocky core, this planet could explain the existence of so-called Hot Super-Earths that are very close to their stars. 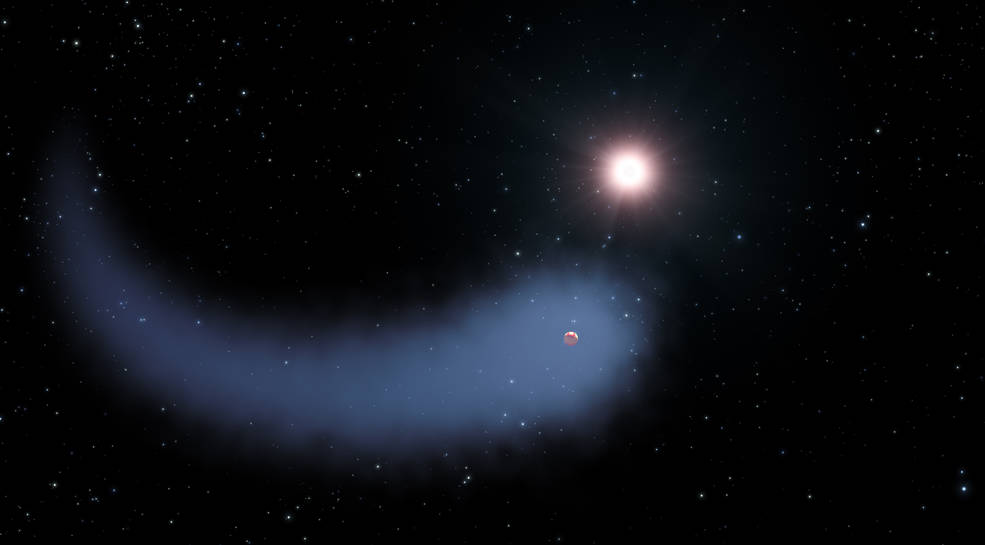 This artist's concept shows "The Behemoth," an enormous comet-like cloud of hydrogen bleeding off of a warm, Neptune-sized planet just 30 light-years from Earth. Also depicted is the parent star (a faint red dwarf) of expolanet GJ 436. The hydrogen is evaporating from the planet due to extreme radiation from the star. A phenomenon this large has never before been seen around any exoplanet

Using Hubble Space Telescope, astronomers have discovered an immense cloud of hydrogen, dubbed “The Behemoth”, evaporating from a Neptune-sized exoplanet named Gliese 436 b (GJ 436b, GJ436). The enormous, comet-like feature is about 50 times the size of the parent star.