NASA's Flying Observatory SOFIA to Explore Magnetic Universe and Beyond

NASA’s Stratospheric Observatory for Infrared Astronomy, SOFIA, is preparing for its 2018 observing campaign, which will include observations of celestial magnetic fields, star-forming regions, comets, Saturn’s giant moon Titan and more.

This will be the fourth year of full operations for SOFIA, with observations planned between February 2018 and January 2019. Research flights will be conducted primarily from SOFIA’s home base at NASA’s Armstrong Flight Research Center. Highlights from these observations include:

The observatory’s newest instrument, the High-resolution Airborne Wideband Camera-Plus, called HAWC+, will continue research with its polarimeter, a device that measures the alignment of incoming light waves. These investigations will help researchers understand how magnetic fields affect the rate at which interstellar clouds condense to form new stars.

•One such program will use the instrument to understand the impact magnetic fields have on stars forming inside a dark cloud, a stellar nursery filled with dust and molecules, called L1448. 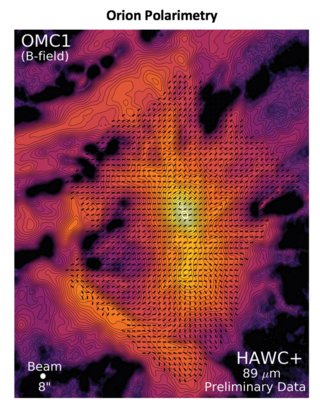 The High Resolution Mid-InfrarEd Spectrometer (HIRMES), is a spectrometer optimized to detect neutral atomic oxygen, water, as well as normal and deuterated (or "heavy") hydrogen molecules at infrared wavelengths between 25 and 122 microns (a micron is one-millionth of a meter). These wavelengths are key to determining how water vapor, ice, and oxygen combine at different times during planet formation, and will enable new observations of how these elements combine with dust to form the mass that may one day become a planet.