Bringing some of the mysteries of the universe a little closer to home.
Post Reply
6 posts • Page 1 of 1

After NASA announced in February the discovery of a solar system with seven planets—three of which were deemed potentially habitable—UChicago postdoctoral scholar Sebastiaan Krijt began wondering: If a life form existed on one of these planets, could space debris carry it to another?

In research recently published in Astrophysical Journal Letters, Krijt and fellow UChicago scientists conclude that life forms, such as bacteria or single-cell organisms, could travel through the newly discovered TRAPPIST-1—an unusual solar system that presents an exciting new place in the Milky Way to search for extraterrestrial life.

"Frequent material exchange between adjacent planets in the tightly packed TRAPPIST-1 system appears likely," said Krijt, the study's lead author. "If any of those materials contained life, it's possible they could inoculate another planet with life."

The researchers ran several simulations for TRAPPIST-1 and found that the process could occur over a period as short as 10 years. Most of the mass transferred between planets that would be large enough for life to endure irradiation during transfer and heat during re-entry would be ejected just above escape velocity, they concluded. 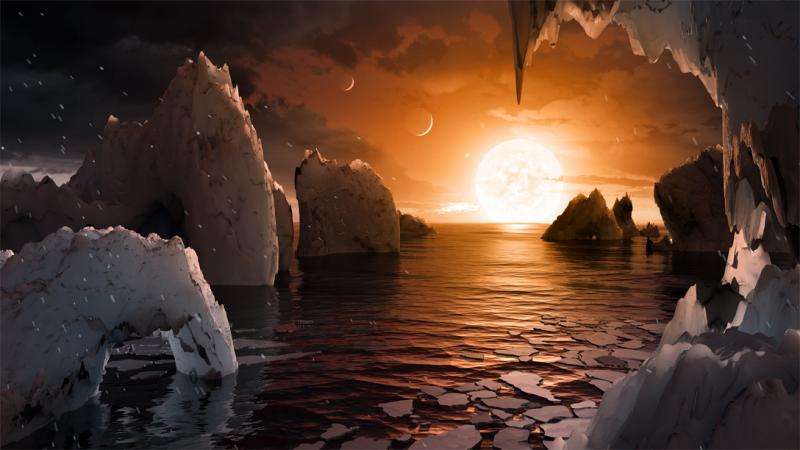 Illustration shows the possible surface of TRAPPIST-1f, one of the seven recently discovered Earth-sized exoplanets.

Seven Earth-sized planets have been observed by NASA's Spitzer Space Telescope around a tiny, nearby, ultra-cool dwarf star called TRAPPIST-1.

Three of these planets are firmly in the habitable zone.

Over 21 days, NASA's Spitzer Space Telescope measured the drop in light as each planet passed in front of the star.

Spitzer was able to identify a total of seven rocky worlds, including three in the habitable zone, where liquid water might be found.

Cool I like that subject,
I always thought there are planets with life on them!
Top

Tiny eight-legged animals survived exposure to the harsh environment of space on an Earth-orbiting mission is further support for the idea that simple life forms could travel between planets.

This idea, called panspermia, is not new. It holds that the seeds of life are everywhere, and that microbial life on Earth could have traveled here from Mars or even from another star system, and then evolved into the plethora of species seen today. In essence, we may all be Martians.

Meet the water bear, the world thoughest animal. Measuring only some 0.1 to 1.5mm, this tiny creature resembles a minature bear

And the incredible survival tale of the tiny tardigrades, also called water bears, is a dramatic reminder that life can survive space travel. The dot-sized invertebrate creatures endured 10 days of exposure, and upon return to Earth, scientists found that even some of those exposed to solar radiation had made it through. Though it had already been shown that single-celled organisms could survive space, tardigrades are eight-legged animals on a different branch of the tree of life than microbes.

"It is an exciting result that seems to support the idea that life forms could be exchanged between planets such as Earth and Mars," said David Morrison, an astrobiologist at NASA's Ames Research Center.

"Now we know that species from three very different organism groups — bacteria, lichens and invertebrate animals — are able to survive at least short periods under space vacuum and also under some restricted conditions of solar radiation," said K. Ingemar Jonsson, who led the tardigrade study out of Kristianstad University in Sweden. "And if protected from sunlight, all these groups could probably survive for several months, perhaps years, in space."