Come on tell us a bit about yourself, we don't bite! 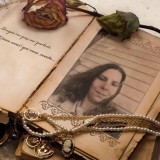 I was raised a good little Southern Baptist. I've always been fascinated with paranormal and esoteric things, and have had lots of strange happenings. I always knew I was different. At 34 I had a panic attack so severe that I literally thought I was going to die. I realized I must be suppressing something that could only come out in that way. I realized I was an empath, which turned everything on its head as far as what I had always been taught was right or wrong. Especially when I realized I could pick up on things from photos, the earth, and plants. I also realized I had a strong connection to the earth, and can actually draw energy from it. Now I'm a transformed Christian with an open mind and a desire to learn more about what I believe are my God given gifts. I know those who claim to be Christian are often the most intolerant of people, so I would like everyone to know that I don't judge. I don't pretend to know what is right or wrong for someone else's life. To be honest, I'm not always sure what's right or wrong in mine. :) :P
It's all about love... and great herbs
Top

Welcome to ABT Raindrop. Hi Raindrop, welcome to ABT :)
Nice intro. I'm glad you found exactly what you needed


We have a special section of the forum for Empaths, :) this is a great place to expand understanding and learn, grow, share and generally have fun socializing with others like yourself.........
See you around in chat maybe
Take care :)
"Promise me you'll always remember: You're braver than you believe, and stronger than you seem, and smarter than you think." - A. A. Milne
Top

Do I need to create a separate account to enter chat? My forum sign in information doesn't seem to work.
It's all about love... and great herbs
Top

Welcome to ABT
It's good to have good people like you ^-^

Nice to meet you Raindrop and welcome to ABT! Hope you find some of the things you are looking for here. There will be plenty of people to speak to and guide you through your spiritual journey. It is okay to be different, we all are and all have differences in our beliefs :)

Raindrop, what a lovely intro and so nice to have you with us. I also have a Christian background but have walked away from doctrinal teaching, although I will still profess Jesus as my brother and guide to the Father. For me, it's all about learning to love our fellow man.
Nice to meet you and welcome aboard.
Let your weird little light shine so the other weirdos can find you.
Top
Post Reply
8 posts • Page 1 of 1